Balleo has never stopped trying to defeat Beegee's Army till today, even though that would be impossible. He now hates Beegee even more after his defeat in the Balleo-Beegee War. He has expanded his army to a much larger one than before. Currently, he is still gathering troops, planning an attack on the Beegees. The gallery below contains the main members of the Balleo Army. 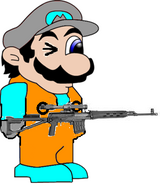 Jalleo
Add a photo to this gallery
Retrieved from "https://greatbeegee.fandom.com/wiki/Balleo_Army?oldid=12284"
Community content is available under CC-BY-SA unless otherwise noted.